Happy New Year! I want to share this book review with you before another 2013 recap post on Friday. This was one of my three favorite reads this year!

Years ago my senior English teacher returned to South Dakota from Minnesota after getting her Master’s degree at St. Scholastica in Duluth raving about this book she’d read. She repeatedly recommended it to me. I somehow put it off for years; until I was sifting through books in Goodwill and saw it: Peace Like a River by Leif Enger. 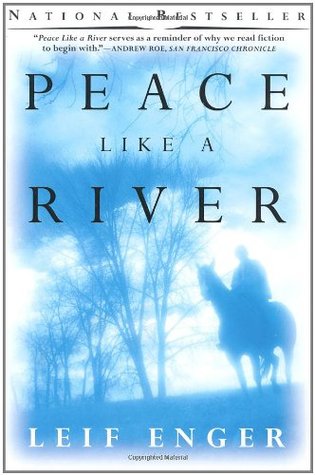 I can sum up my thoughts about this book in one word: Beautiful. The story is beautiful; the writing is beautiful (the imagery! the characters!). It truly is a wonderful book that I’m ashamed to admit I waited so long to read.

As the book followed Reuben’s family on a quest led by patriarch Jeremiah Land, I was struck by how magical but ordinary everything was. I definitely didn’t grow up in North Dakota in the 60s, but the happenings of the book are almost mundane. Until we get to the miracles that Reuben documents. Then we’re transported into a land of magical realism, and it’s a wonderful land.

A reviewer on Goodreads implies that the reader must have faith in God to believe the miracles in this story (or to not have trouble accepting them), but I strongly disagree. Suspension of disbelief is all that it requires, a willingness to let the story tell itself, to be entertained but not to question things as one would in real life. Coined in 1817 by Samuel Taylor Coleridge, suspension of disbelief suggests “that if a writer could infuse a human interest and a semblance of truth the reader would suspend judgment” about the plausibility of the tale (Wikipedia). As magical realism, elements of magic, miracles, etc. are a natural part of an otherwise normal world. Additionally, in our contemporary literary world soaked in dystopian fiction, a little magical realism or a miracle here and there should be believable.

“Fair is whatever God wants to do.”

“Real miracles bother people, like strange sudden pains unknown in medical literature. It’s true: They rebut every rule all we good citizens take comfort in. Lazarus obeying orders and climbing up out of the grave – now there’s a miracle, and you can bet it upset a lot of folks who were standing around at the time. When a person dies, the earth is generally unwilling to cough him back up. A miracle contradicts the will of the earth.”

In his Goodreads author profile, Enger’s writing is described as “a smooth mix of romanticism and gritty reality, recalling the Old West’s greatest cowboy stories.” I couldn’t sum it up any better.

The characters were very well written in this story as well. They all seemed very normal but went through transformations that could be considered magical or at least stretched reality in interesting ways.

The pace of the story and its progression to the end was all very logical—a nice contrast to the magical/spiritual elements.

Overall, the story was amazing. I wouldn’t have changed a thing about the way Enger told the story.

Have you read Peace Like a River? What did you think? Also, what are your thoughts on suspension of disbelief?

One thought on “Book Review: Peace Like a River”