OK. Now I need you all to keep me honest. Stay tuned for some awesomeness this year!

Do you have any goals or resolutions for the year?

This year Lent is providing me an excellent opportunity to push myself to live my life more intentionally, to really focus on how I live and how it impacts me, my family, my community and the earth.

My first step in to learning to live intentionally was figuring out how I spend my time and if it fits with my goals and values. I quickly identified one way that I spend my time that doesn’t match up to my goals. I frequent a forum where I can spend hours chatting away without accomplishing anything.  I really enjoy my time there, but it’s become my go-to for entertainment when I could be focusing most (not all) of my time and energy actively engaged in achieving my goals.

A large part of living intentionally is truly understanding the world around me an embracing my spirituality. For the next 40 days, I will be reading 7: An Experimental Mutiny Against Excess by Jen Hatmaker and Rediscovering Catholicism by Matthew Kelly. These books will help me understand how my actions impact me spiritually and my community.

Are you giving anything up for Lent or trying to live more intentionally regardless of a religious or nonreligious affiliation?

What I Would Do If Money Were No Object

The 5 Best Moments of My Life

10 Places I Need to See Before I Die

10 People who Inspire & Influence Me

Well, this my friends, is my 100th post. Despite many stops and starts, name changes and questions about the focus of my blog, I’m proud to say I have it all figured out (for now)!

So, to celebrate, I wanted to share 100 super important things. I decided to split the post in two because these are so important that I didn’t want to overwhelm any readers.

10 Goals for the Blog

10 Important Things About Me 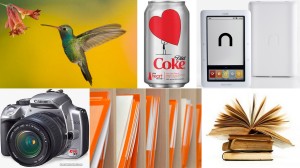 I’ll be back on Friday with the remaining 50 Super Important Things. Have a great day!

By Randy Pausch with Jeffrey Zaslow

With more than 15 million views and more than 64,000 likes on YouTube, Randy Pausch’s last lecture continues to inspire people to achieve their dreams five years later.

When Randy stood on the Carnegie Mellon auditorium stage to give his lecture on achieving childhood dreams, he was trying to leave a legacy for his young children. No one, not even Randy or the audience, could have imagined just how lasting his legacy would be.

The Last Lecture was a series presented by Carnegie Mellon in which the speaker ponders his/her death. Although that wouldn’t have been difficult for Randy, a computer science professor and virtual reality geek who was dying of pancreatic cancer, the university had decided to rename the series “Journeys” before offering Randy the slot. 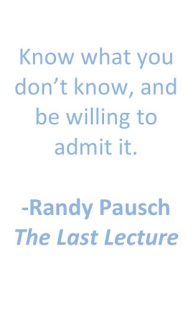 In this small book, Randy strengthens that legacy by recounting his life, how he came to be on the stage that night, and the advice on living he gave to that lecture’s overflowing audience. He wrote a little about death, dying with grace and living while dying.

Great advice and humor are sprinkled throughout the book and the lecture. Randy used the humor to grant levity and avoid pity. As he said during his lecture after proving that he was in great shape by doing push ups, if anyone wanted to pity him they could come on stage, do a push up, and then pity him. He was happy. It’s all he knew how to be. He was a Tigger, not an Eeyore.
The book while short, is chock full of inspiration and provides many thought provoking points throughout. I highly recommend this book to anyone who hasn’t read it yet.
Randy Pausch passed away July 25, 2008 at his home. He lived five months longer than the three to six months his doctor had given him. He was survived by his wife, Jai, and three children, Dylan, Logan and Chloe. Representative of his legacy, his obituary was published in the New York Times.