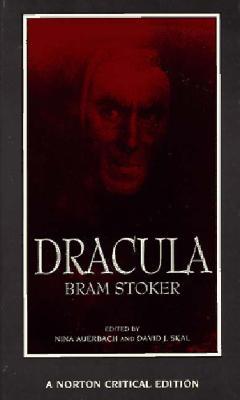 Although not the first vampire novel, Dracula is the most famous original, the one that really seems to have influenced a certain awe with vampires for nearly a century and a half. And as most of us know, vampire culture is huge in the US. I wouldn’t consider myself a huge fan of vamp culture, but I’ve definitely read some of the books and watched some of the TV shows and movies. I’ll admit right here that I’ve seen two of four Twilight movies, and I’ve already admitted in the past to reading all but the latest Sookie Stackhouse book.

I really enjoyed this book. From the vampire story to the epistolary nature in which it’s told, I was riveted. In the beginning we’re told that the manner in which the story was accumulated will eventually be revealed, but before then, we’re treated to first person accounts of Count Dracula in Jonathan Harker’s journal, concerns about her loved ones and wishes for their future in Mina Harker’s journal, a few bits and pieces about her sleepwalking ordeal in Lucy Westenra’s journal and a few memorandums and notes from other characters. Eventually, the journals all focus on one thing: Count Dracula.

I found the themes of the book–the role of Victorian women in society, immigration and more–interesting as well. In regard to the role of women, that’s mostly addressed by the back and forth the group of men has with Mina. Will she be allowed to help or won’t she? At times, she seems to be emotionally stronger than the men, going so far as to continue to encourage them and support them as she’s dealing with her own issues. But, yet, the men still aren’t sure how much involvement she should have.

On the matter of immigration, I think Count Dracula sums it up quite well when he explains to Jonathan Harker why he’s taken years to perfect his English before moving:

“But a stranger in a strange land, he is no one. Men know him not, and to know not is to care not for.”

For a time, that almost makes me feel sorry for Dracula but only for a short time.

There are so many good quotes in this book, so here are a few of my favorites.

“I am all in a sea of wonders. I doubt. I fear. I think strange things, which I dare not confess to my own soul.”

“The last I saw of Count Dracula was his kissing his hand to me, with a red light of triumph in his eyes, and with a smile that Judas in hell might be proud of.”

“Though sympathy can’t alter facts, it can make them more bearable.”

“He was a good fellow, but his rejoicing at the one little part in which he was officially interested, of so great a tragedy, was an object-lesson in the limitations of sympathetic understanding.”

“I know what sorrow you have had, though I cannot measure the depth of them.”

See my quotables section above. I found the writing in this story to be almost top notch.

The epistolary approach allowed Stoker to more than adequately develop his main characters.

The structure of the plot was good, but I felt it a little lacking. There were many times when I was a little confused at the passage of days and each characters’ activities.

Really this is a great story.

Have you read Dracula? What did you think?